With a rich British watchmaking heritage that dates back to the 18th century, Arnold & Son masterfully reinterprets history with a visionary eye to the future. Underscoring its watchmaking prowess, Arnold & Son regularly unveils complicated watches with a unique twist. The patented Golden Wheel deftly reflects the brand’s ingenuity and commitment to Haute Horlogerie.

The Golden Wheel presented by Arnold & Son at Baselworld 2015 is a beautiful interpretation of the ancient wandering hours complication in a three dimensional format. It has roots dating back to the mid 17th century with the first implementation being produced for pocket watches around the 18th century. Many have argued on its original birthplace with some believing it to have originated in England. So it was only right that Arnold & Son to take up the mantle and reinterpret this beautiful complication. The Golden Wheel is the first ever watch to feature both wandering hours and a true beat seconds function together in the one timepiece. It is part of the Instrument Collection, which pays tribute to the timepieces focused on chronometry, which were developed in the second half of John Arnold’s life (The founder of Arnold & Son). It has been three long gruelling years in the making, from concept to development and the challenge was met during multiple stages of both design and development. 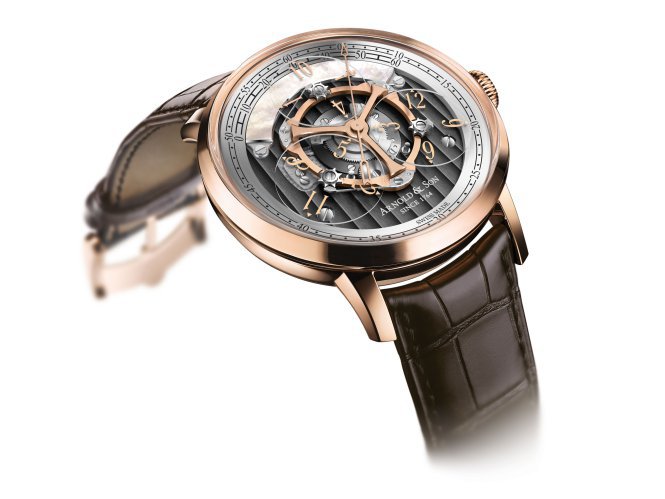 Centred around a 44mm 18-carat red gold case, the Arnold & Son Golden Wheel features a cambered sapphire crystal with anti-reflective coating on both sides and also has a see-through sapphire case back for full view of the movement. The dial has a silver sheen with white mother of pearl. The wandering hours function takes up the upper portion of the dial between 10 o’clock and 2 o’clock. 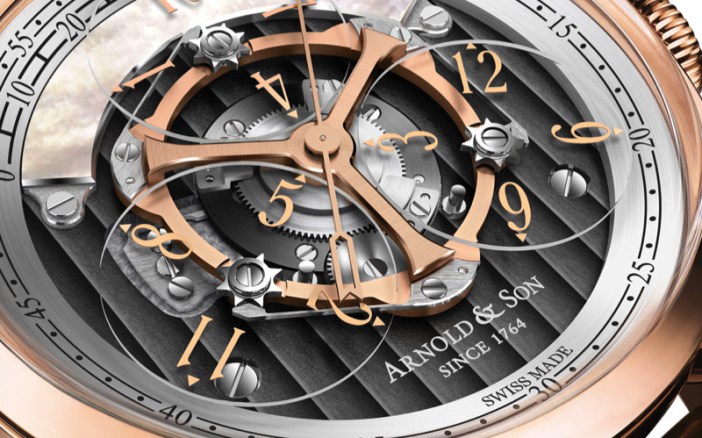 Just underneath, beats the beautiful time-carrousel of the Golden Wheel, the standout feature of the piece. It is both a complicated and absolutely stunning motion that performs a ballet from the center axis. The true beat seconds, or as it is also referred to, the dead beat seconds, is a very precise function that enables the seconds to beat incrementally as opposed to the sweeping motion seen in most mechanical watches. This function allows for more accuracy when reading the time during the course of the day and is a speciality of Arnold & Son. 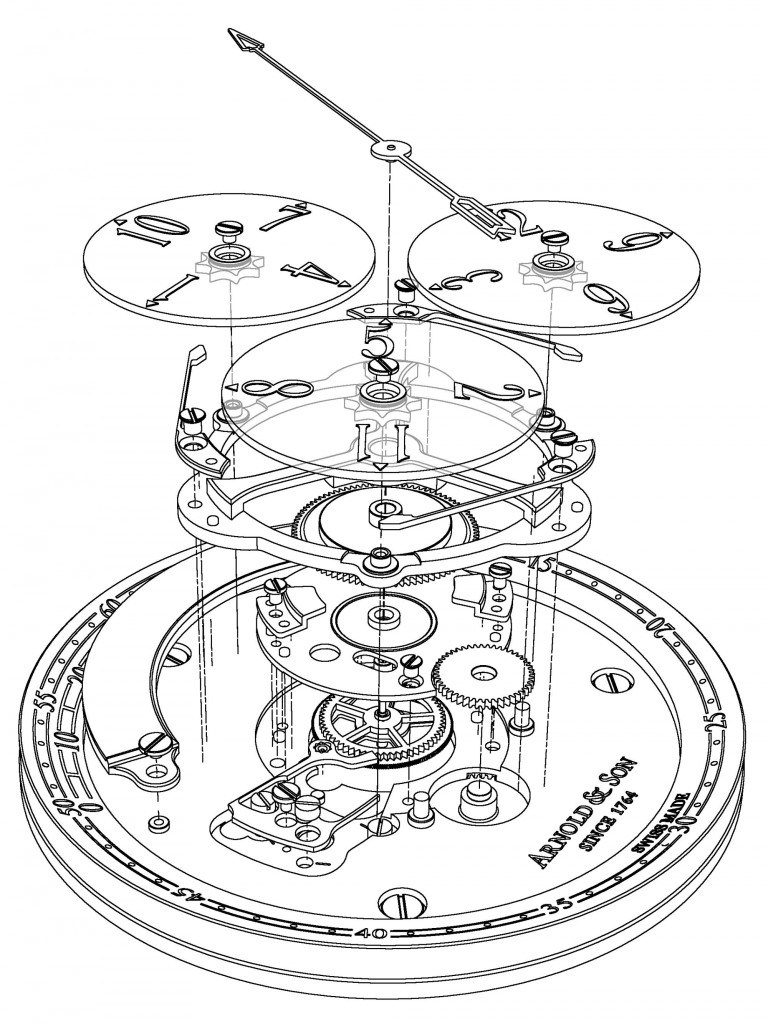 Breakdown of the A&S6018 movement.

The Golden Wheel houses the A&S6018 mechanical self-winding movement with 29 jewels and has a total of 232 component parts all working together and beating at a steady 28,800 vibrations per hour. In true Arnold & Son fashion, the movement has been detailed in great detail and beauty. The movement has been treated in palladium and is decorated with hand-chamfered bridges with polished edges, fine circular graining, Côtes de Genève rayonnantes, circular satin-finished wheels and blued screws with bevelled and mirror-polished heads. The oscillating weight has also been skeletonised with brushed surfaces and also treated with palladium.

Finished off with a hand-stitched brown or black alligator strap, the Arnold & Son Golden Wheel is limited to just 125 pieces. For more info, please visit arnoldandson.com 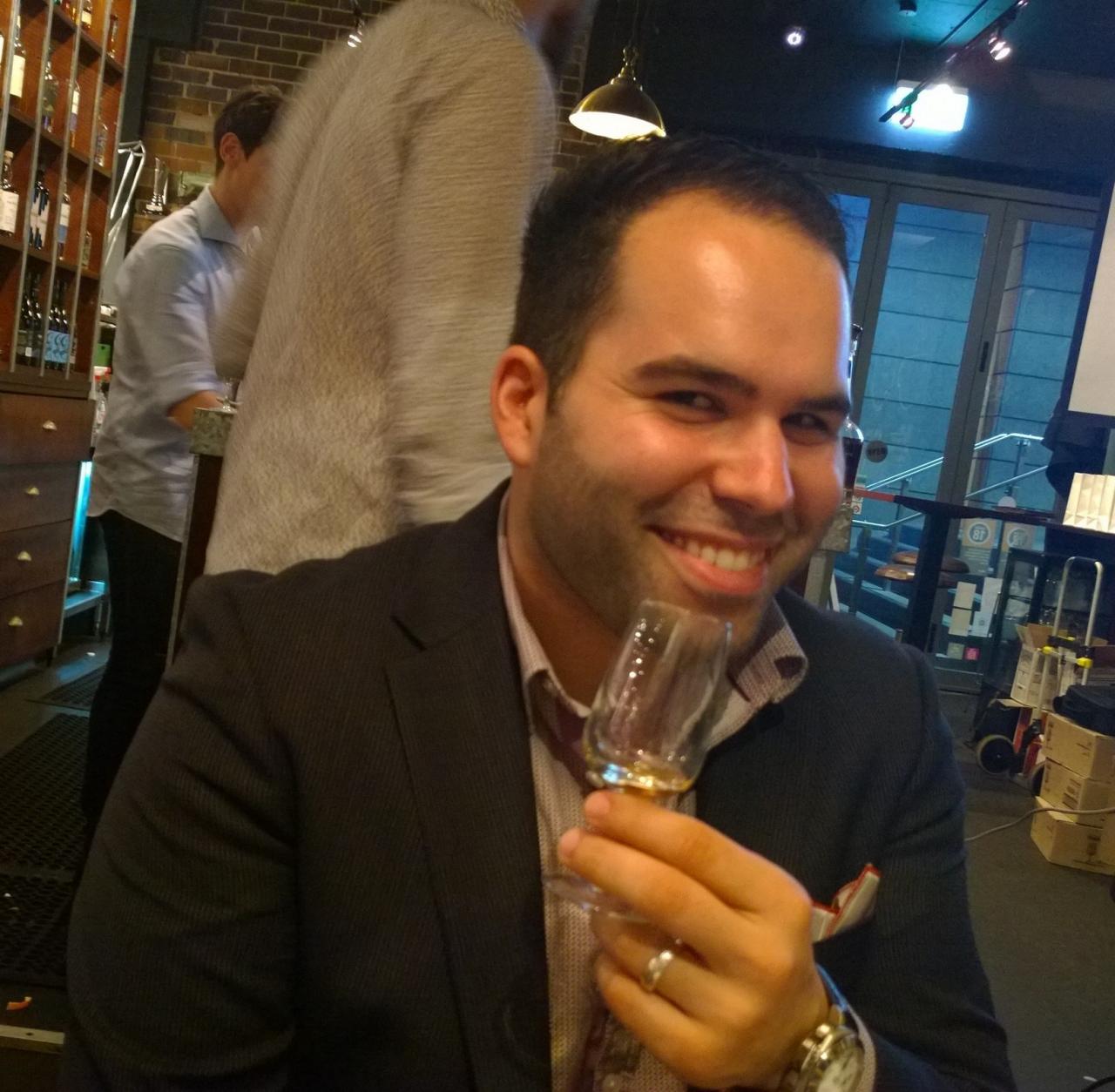 Drawing on a lifelong love of horology and a more recent introduction to appreciation of fine whisky, Osheen brought the two together with watch & whisky. He is proprietor of the site, which covers everything related to watches and whisky. In between completing a degree in commercial law and supporting a rich social life, he is out and about attending all the latest watch and whisky events Sydney has to offer. His passion has also taken him around Australia attending a number of events and he hopes to continue his career in the watch industry on a more serious level after he graduates. Read his articles here.