Henry Ford once said: “If I had asked people what they wanted, they would have said faster horses.” But the inventor trusted his instincts, and rather than faster horses, he gave us the car. The first Ford Model T rolled off the production line in 1908, thanks to the conviction of a man who didn’t listen (only) to his clients.
One hundred and ten years later, Ford’s observation is still as relevant as ever. It was the inspiration behind Baume & Mercier’s main announcement at the SIHH 2018. The company’s first in-house movement, the Baumatic, was inspired largely by what was coming back to the workshops for after-sales servicing. The aim was to identify the main issues with the movements they had been using, and solve them. It might seem obvious, but it wasn’t straightforward. Baume & Mercier is not a manufacture, so it had no input into the development of the calibres it uses.

It’s 2018, and Baume & Mercier is still not a manufacture. But it has brought three elements together: the manufacturing capacity of ValFleurier (a movement production company in the Richemont group), its own Research & Innovation division, and membership of the Microcity innovation cluster.
On the strength of these synergies, Baume & Mercier issued a brief for a watch movement that would achieve four things: it would be anti-magnetic, more precise, with a better power reserve and requiring less servicing. The brand’s positioning implies a fifth requirement: an affordable sales price. 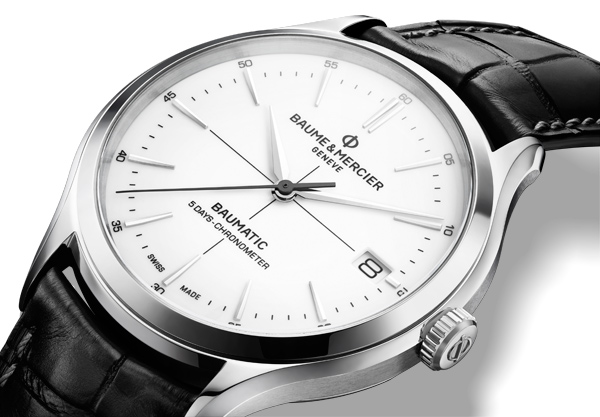 The Baumatic meets every one of these criteria. Magnetic sensitivity has been greatly reduced thanks to a procedure that is now increasingly common: the use of a silicon escapement – pallet, pallet wheel and balance spring. The pallet is made by Valais company Sigatec, and the balance spring is produced by a newcomer to watchmaking – Tronics, a subsidiary of TDK.
If this was an invite only watch event, it would play out as such: Maximillian Busser and Friends would organize a private gathering in Lake Geneva together with the best watch influencers to discuss the state of the watch industry, possess a “watch series” full of one-off collectibles, and, importantly, drink copious amounts of “warm” beer with a side of gloating to help wash down it. Some of the invitees are Andreas Strehler, Kari Voutilainen, Roger W. Smith, and Vianney Halter, as headliners. Richard Mille, De Bethune, Ressence, and HYT would represent a number of the innovative watch businesses to pop up with all showcases. The bonus round are the Deep Dive Sprint (most water and pressure resistance). Completing the festivities would be a “watch series” along with a tribute movie of the late George Daniels. Of course, Baume et Mercier would be the title sponsor of this shindig with everyone riding in around Indian Motorcycles.
The balance spring uses Twinspir technology, which incorporates two layers of silicon aligned at 45° to each other, sandwiched together with a layer of silicon dioxide, which also provides temperature compensation. The Baumatic movement can also withstand magnetic fields of up to 1500 Gauss, which is ample for everyday use.

The calibre owes its precision to a number of factors, which include the Twinspir technology, but it also has a new gear train design and optimised movement architecture. The Baumatic also complies with COSC chronometer certification.
But for the end client, probably the most obvious improvement will be the increased power reserve. Here there are no half measures – Baume & Mercier guarantees a full five days! These 120 hours are supplied by a completely redesigned barrel which is just 0.6 mm wider. The space occupied by the Nivaflex mainspring is optimised, but the number of coils (15) is the same as you’ll find in most production calibres. Unofficially, the Baumatic can even go as high as 130 hours of power reserve, with excellent isochronism for 80 hours – at which point most other movements would already have given up the ghost!

Finally, the service interval has been optimised through better use of lubricants. The movement uses four oils, three of which were completely redeveloped for the Baumatic. Unusually for a modern watch, oil is even used in the escapement. Use and wear will show whether this innovation stands the test of time.
The inaugural Baumatic collection will be a Clifton (40 mm). There will be two versions, one COSC-certified and the other not. The former will be priced at €2,600 incl. VAT, the latter €2,450 incl. VAT (€2,600 on a steel bracelet). A fourth version will be offered with a gold bezel, for €3,100 incl. VAT. These models will be available in the new year. As an added bonus, given that the movement measures 28.2 mm in diameter for 4.2 mm deep, a women’s version is a distinct possibility. 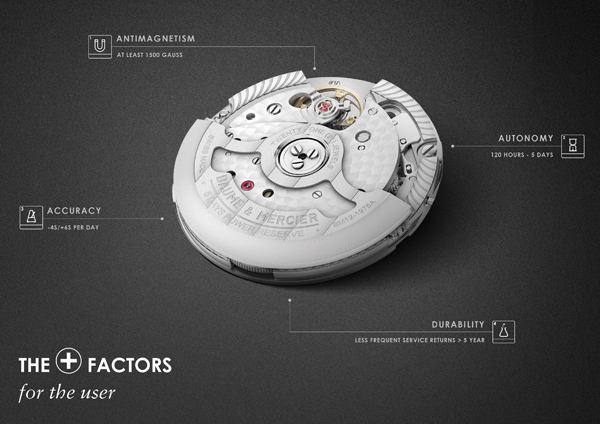