Blancpain has re-interpreted one of its core timepieces, the three-hand model of the Fifty Fathoms Bathyscaphe, outfitting it with a deep blue dial evoking the depths of the sea. Adding to its allure, the plasma gray ceramic bezel has been equipped with a blue ceramic insert featuring Liquidmetal hourmarkers, an alloy serving to avoid distortions. The case highlights the technology involved in creating gray plasma ceramic, a production method that gives the color a subtle metallic shade. Plasma gray ceramic was used for the Bathyscaphe Chronographe Flyback Ocean Commitment that was launched in 2014. 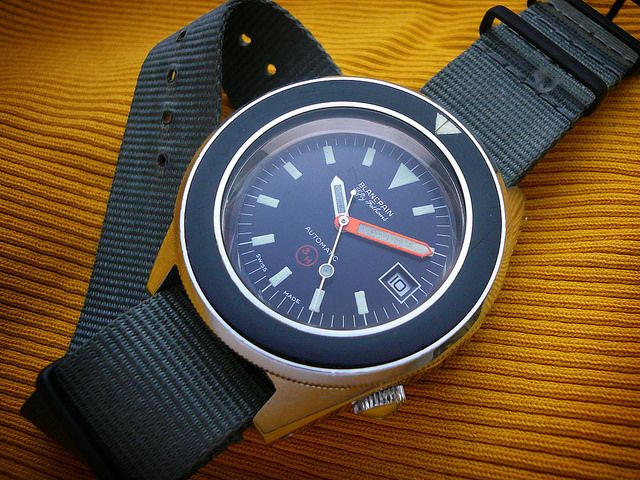 The Blancpain Bathyscaphe diving models first appeared in the late 1950s in both men’s and women’s versions. To mark the anniversary of the Fifty Fathoms in 2013, the Bathyscaphe reappeared with a new aesthetic recalling the first versions. The crisp outlines are reminiscent of their predecessors, the hands feature the traditional look of vintage watches and the date appears through a small window. The presence of a luminous index located on the bezel, serving to enhance readability during dives, is faithful to the original version of the Bathyscaphe. 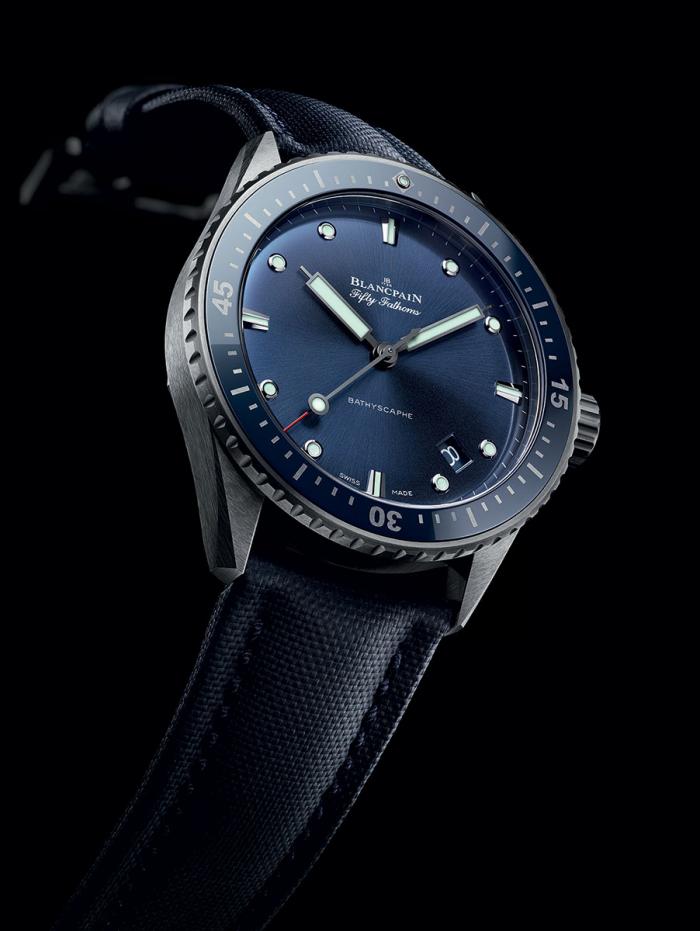 As with all diving watches worthy of the title, each model has been fitted with a unidirectional bezel which can be rotated with defined clicks in a counter-clockwise direction. During dives, the large seconds hand serves as an indicator that the watch is running. The Fifty Fathoms Bathyscaphe is water-resistant to 30 bar, equivalent to 300 meters. The self-winding caliber powering the Fifty Fathoms Bathyscaphe is the famous 1315, distinguished by its sturdiness and its exceptional chronometric performance. Representing an authentic technological feat, its three series-coupled mainspring barrels ensure a generous five-day power reserve while guaranteeing a constant supply of energy. This movement is visible through the clear sapphire caseback which allows the owner to admire its modern and technical aspects. It is fitted with a balance-spring in silicon. The latter is an innovative material within the watch industry that features several key assets: low density that makes it particularly light, strong shock-resistance, as well as imperviousness to magnetic fields. These properties ensure the almost perfect geometry of the balance-spring, thereby improving the isochronism of the movement and hence the precision of the watch. Conceived for sports watches, the 1315 caliber is fitted with a robust glucydur balance wheel, with square-head gold micrometric regulating screws guaranteeing precision as well as efficient adjustment.