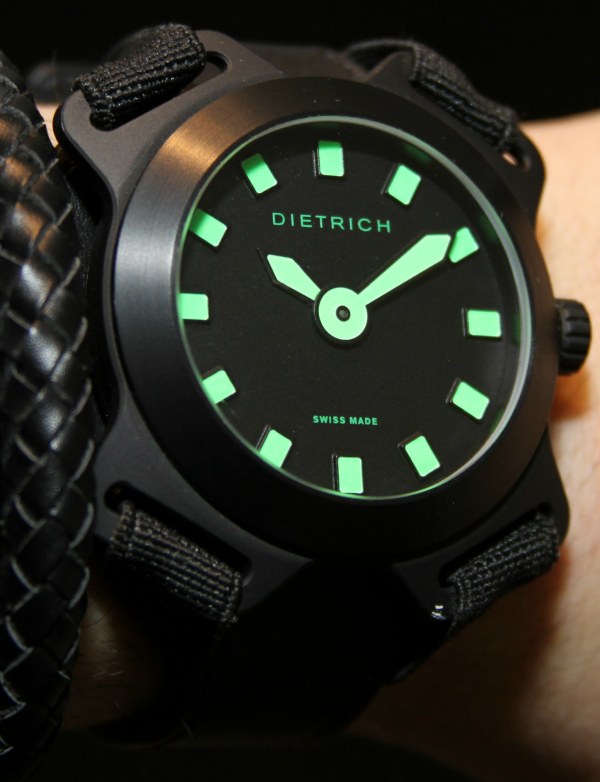 This was a pretty cool and innovative new watch that I got to learn about at the 2012 GTE event in Geneva recently. The brand is called DDietrich (by Mr. Dietrich) and they have at least two models right now. One is called the Night and another is called the Snow. The Night is nice and good but the Snow really caught my eye.

The versatile watch is designed to go either on your wrist or over your jacket while skiing or out in the snow (while wearing a larger jacket). The modern design is minimalistic, but also functional and pretty. Unlike most watches with two straps, this one has four. The straps come in green or black, and there is a special section on the strap that looks like a black box which is used for adjusting the length of the elastic strap. To adjust it, you need to use a special key. 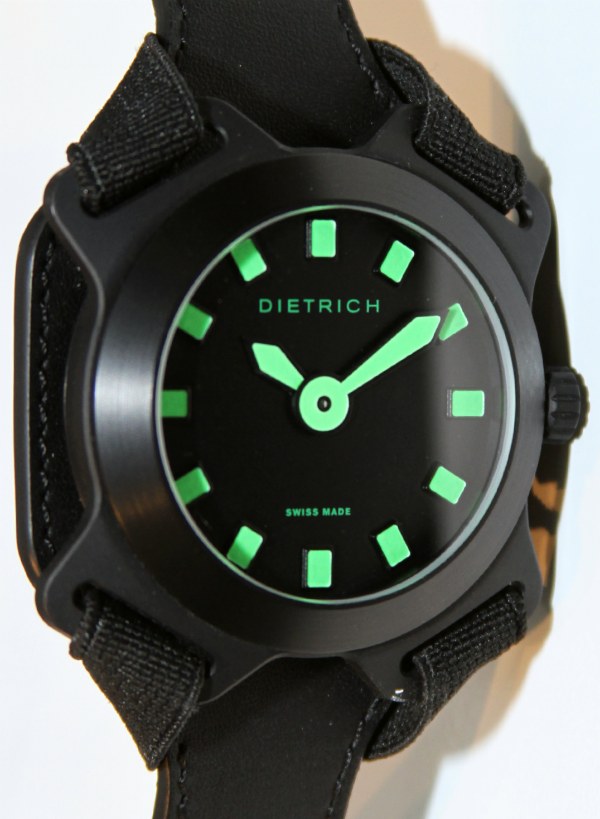 Since the 1980s, models may also be supplied with a lock in the shape of a double CC emblem. The bag is quilted, a pattern intended to give it shape and quantity, and this layout element is reflected in the bracelet of this watch, a design used previously by Chanel in both its timepieces and fine jewelry collections. This cross-referencing of Chanel layout codes frequently appears in Chanel timepiece collections, by the tweed-patterned straps of the Boyfriend collection to the Camelia, Coco’s favourite flower, depicted on so many dials and at the movement itself of this Caliber 2 in the Premiere Camelia Skeleton. If anybody has the right to present a watch inspired by a handbag, it is Chanel.The Chanel Code Coco in stainless steel.The Code Coco’s elongated case includes upper and lower squares divided by a middle portion that resembles the grip on the 2.55 handbag. From the basic steel version (H5144) without a diamonds around the bezel, bracelet or dial, the top dial is only set with a single princess-cut (square) diamond, while the decrease dial informs time, and the dials are black lacquered. The case is set with seven princess cut diamonds totaling 1.12 carat, and the dials are set with 136 brilliant-cut diamonds and a single princess cut diamond, totaling 0.83 carat. 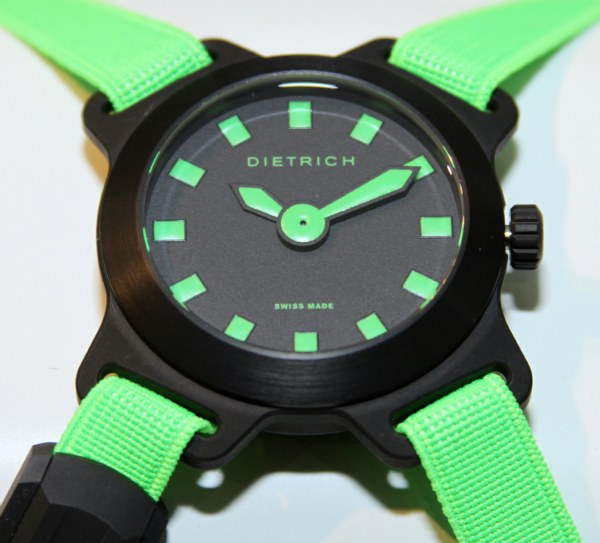 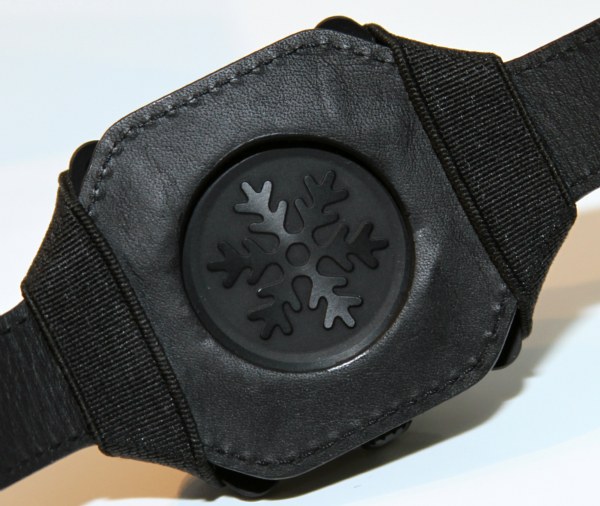 If you want to wear the Dietrich Snow watch on your wrist then all you need to do is attach the optional leather strap module. It works pretty well and you won’t even much mind the elastic straps holding it in place. Overall the concept feels fresh, European, and interesting. The Snow watch case is 44mm wide and 12.1mm thick. According to Dietrich, the design of the strap system was to prevent the watch from moving around too much while being worn on a jacket during high movement activities.

The caseback Indicates this too: 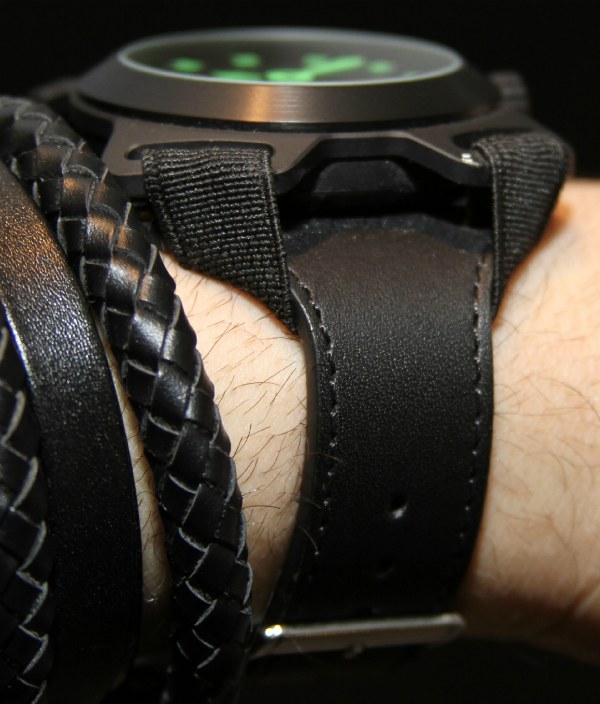 In black, the case is aircraft aluminum and pretty light. The case is further water resistant to 200 meters and has a sapphire crystal. On the bottom of the case is a pretty sweet looking snowflake icon in relief. Construction seemed solid and the overall design was slick and inspired.

The watch dial is very handsome. I like the raised hour markers and hands in green. The watch is certainly bold, but not “in your face”. It is a good mixture of minimal and sporty. This designer look is going to appeal to a lot of people as it prevents the watch from being cheesy or boring. Dietrich also knows how to use just enough green without going overboard. 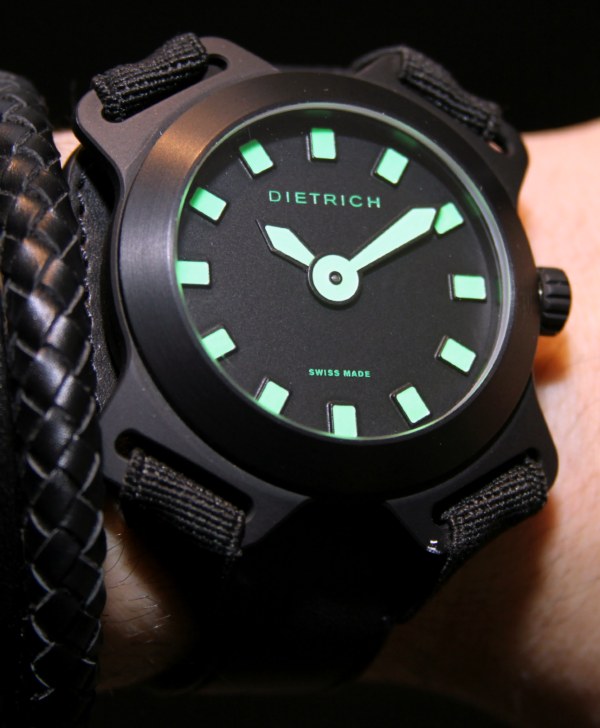 When I spoke to Dietrich, they mentioned to me that the Snow contained a Swiss quartz movement but their website says it has a mechanical movement. So I don’t really know what to make of that. I played with a prototype so it is hard to say what will be in the final product. Either way, the price isn’t terribly outrageous at 980 Euros. Look for the Dietrich Snow watch soon. dietrich-watches.com