I’m aware that I’m assuming a lot. After all, you are on a website dedicated to wristwatches, but most watch geeks might struggle with the name. “Arnold… Arnold… isn’t he an ambassador for Baume & Mercier? No, is he the new watchmaker at Mont Blanc?”, or something like that. This is a crying shame as John Arnold was as influential as A.L. Breguet to the world of watchmaking. His achievements are not touted by the majority of Swiss watch historians who prefer to focus on their own countrymen’s achievements, at the expense of foreign watchmakers like Arnold (and Graham, Tompion,  etc). So here’s a quick list of Arnold’s accomplishments: He was the first watchmaker to use the term chronometer as we know it today and he invented the overcoil balance spring and the detached escapement. When one of his chronometers was tested at The Royal Observatory in Greenwich, London, it had an error of just 2 minutes and 32.2 seconds over 13 months. That’s almost what modern COSC rated chronometers have to be accurate to over a month.

Arnold died in 1799 but his legacy of watchmaking was revived in 1995 by The British Masters brand. This was a Swiss company who breathed life into old watchmakers names, including Graham 1695 and the modern Arnold & Son. Arnold & Son focus on haute horlogerie whose watch movements have been entirely in-house since 2010. These are no ordinary in-house movements either. These are true-beat retrogrades, ultra-thin tourbillons and, in the case the Time Pyramid, double barrel skeleton movements. For a brand that is so young (and old at the same time), this is a huge achievement that rivals anything from older (but also younger ) brands.

The Time Pyramid is Arnold & Son’s entry into the Only Watch Charity Auction and is one of the most interesting pieces available. 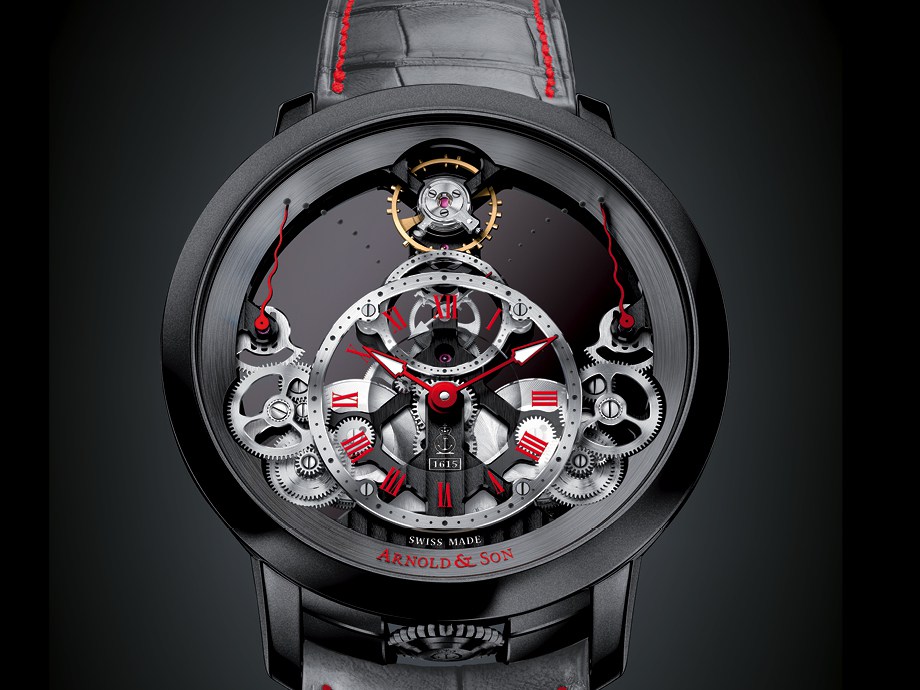 The 44.6mm, stainless steel case has been DLC treated to have a black finish. This large case circles a domed sapphire crystal that showcases the skeleton movement. Skeleton movements and dials have fascinated and perplexed me in equal measure for many years now. Technically speaking, they are an amazing achievement. The amount of work needed to make a functional caliber that also is aesthetically pleasing is vast and not lost on me, but I’ve yet to find a skeleton watch I truly love. Most seem to fail at the intended purpose of a watch, to tell time, as the hands and hour markers get lost amidst the movement and crystal. It’s the anti-thesis of the purpose-built tool watches of the 1950s and 1960s that I love so much. But like many other Only Watch watches, the Time Pyramid shows that functionality doesn’t always have to be at the forefront of a watchmakers mind. Rather than use the entire space, Arnold & Son have placed the dial in a small subsection of the watch and have used a high contrast red for the hands and hour markers. This red not only is eye-catching, but it is the color of the Principality of Monaco, whose Prince is a Patron of Only Watch.

The Caliber A&S1615 has hand-chamfered bridges, that have also been black DLC coated, with two power reserve gauges visible on the dial. These two gauges are linked to the two barrels that power the watch. The first barrel transfers energy into the second barrel as needed, so throughout the day, you’ll see the power reserve of the first gauge go down whilst the second goes up. This arrangement of barrels allows for a more constant torque to the gear train to be delivered, allowing for a more accurate watch. The Time Pyramid has its gear train arranged linearly, running from 12 o’clock to 6 o’clock where the two barrels sit on either side to create the titular pyramid shape. This is an excellent skeleton design as the empty space at the top left and right are used for the power reserve and are uncluttered by the movement beneath.

It may be world’s (and several centuries) apart from the watches of the original John Arnold, but the Time Pyramid is a watch worthy of his legacy.