The Swiss watch brand was the official sponsor of the first annual Wheels & Waves event held in Cayucos at the Swallow Creek Ranch.

Over the course of three days, attendees enjoyed a cultural experience on the coastline of San Luis Obispo County. Guests rode authentic Indian motorcycles and experienced a variety of races at the Santa Maria and Santa Margarita Raceways.

The attendee list was controlled to 300 tastemakers, influencers, top-of-craft artisans, racers, and modifiers. The three day event would include long enjoyment rides, flat track racing, Sons of Anarchy-esque convoy expeditions, an unconventional drag race, along with a secret barn where us “outlaws” can hide and reminisce about the day’s tomfoolery.Vincent Prat and Paul d’Orleans were the organizers of Wheels and Waves California and many of the motorcycle sector’s trendsetters and influencers were in attendance that afternoon including Jamie Robinson out of MotoGeo, Roland Sands from RSD, and even Steve Caballero, a world renowned pro skater, simply to name a couple. Brands like Alpinestar and a slew of all-star modification passengers were current as well, like Deus ex Machina, Revival Cycles, Brat Style, and Suicide Machine Company, just to name a few.The occasion was tightly packed with all kinds of motorcycle “anti-racing.” Race day one was in the Santa Maria Raceway, where I would spend my hot day running across the dirt trail, photographing and watching the Vintage and Super Hooligan flat track races. Drones above, the finish line banner dance in the arid 105 degree weather. One by one, motorcycles would trickle on the tacky hot tarmac. One hundred feet apart, a decommissioned train on which appeared to be a railway going to nowhere, turned into a shady refuge from the heat lamp over. However, more racers arrived, essentially piloting their custom creations, awaiting when the checkered flag could fall for them. 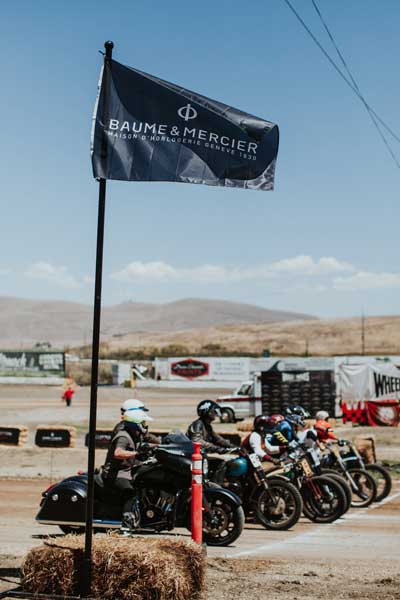 On this occasion, custom Baume & Mercier Clifton Club watches were awarded to race winners. Engraved on the case back of the Clifton Club Automatic model is a one-of-a-kind design commemorating each individual race – Super Hooligans, Vintage Class and Sprint Hero.

“We are thrilled to be a part of such a unique and cultural event,” said Alain Zimmermann, CEO of Baume & Mercier. “The partnership with Wheels & Waves is a fantastic way to celebrate Clifton Club and showcase our commitment to strengthening our presence in the sports segment, with a lighthearted approach.” 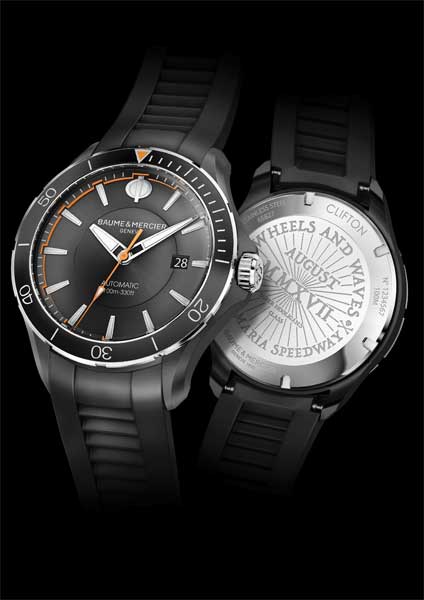