At an event tonight in England, Bremont Watch Company released the latest in its annual tradition of limited editions, the “1918,” a watch that pays tribute to the centenary of Britain’s Royal Air Force. Anyone who knows Bremont knows that its founders, brothers Nick and Giles English, are keen pilots and most of their watches hew close to aviation themes. Past limited editions have paid tribute to famous planes, like the P-51, the EP120 Spitfire, and last year’s DH-88, all of which incorporated actual artifacts from the planes. The 1918 Limited Edition is no exception. Let’s take a closer look at this new complicated chronograph. 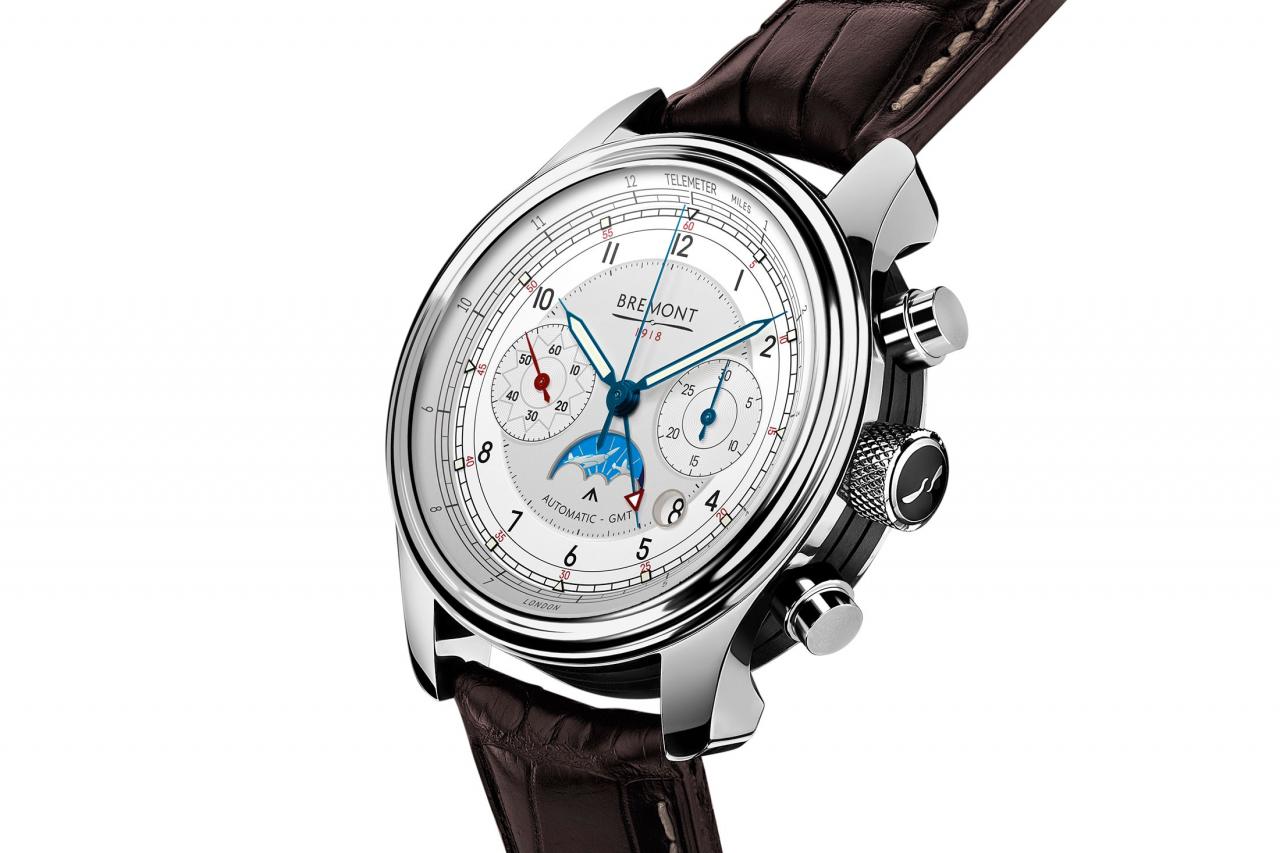 At first glance, the 1918 looks like a marked departure from Bremont’s typical styling, which has favored expansive, legible dials. Besides the company logo, with its stylized propeller, the rest draws closer similiarities to the “busier” markings of the 1940s and ’50s chronographs of other brands. The rehaut has a telemeter scale, a more fitting tool on a military-themed watch than the tachymeters of motorsports watches.

The dial itself is multi-level, with sunken sub-dials for running seconds and the 30-minute counter, and a lower outer ring of Arabic hour numerals, applied luminescent pips, and a “railroad” minute track. The hands are “syringe” style, not unlike the shape of those from Jaeger-LeCoultre’s Master Control series from earlier this year. 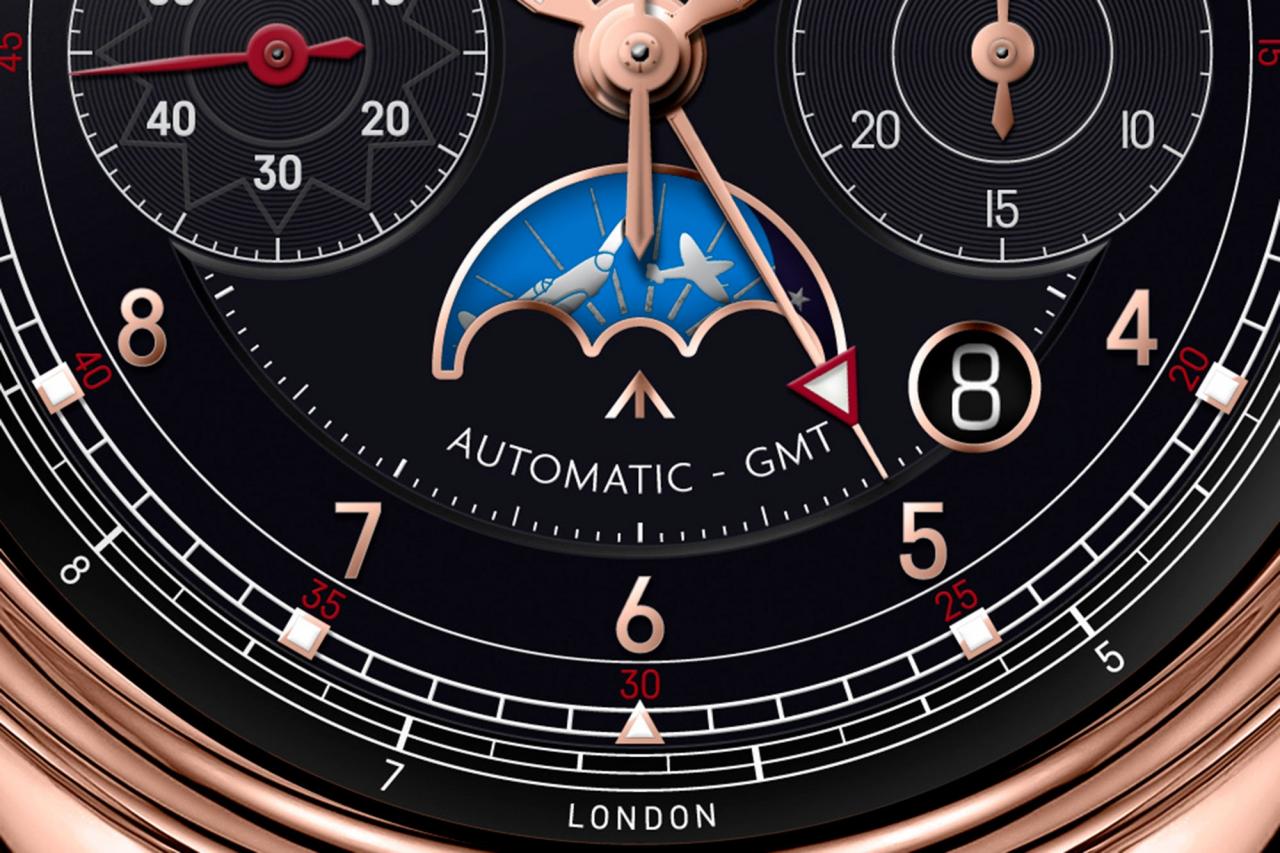 The AM/PM indicator incorporates images of iconic airplanes in the day and night skies.

There are the usual sub-dials at 3:00 for your 30-minute chrono counter top and at 9:00 for running moments. The Arabic markers are employed and also the baton shaped hour and second hands are full of SuperLuminova. Regardless of the large 43mm case dimensions, a significant portion of the dial area is consumed by the telemeter scale, and while thematically it is fitting, it might prove distracting to a wearers in practice because of the rise in clutter.Another controversial choice is your window, that can be in the notorious 4:30 place. Considering all the various indicators on the dial, I think that the date window could’ve been left out. A curious design option is the contrasting sub-dials on the white golden variation (white on blue) but another two variations have sub-dials with exactly the same colour as the chief dial. I don’t find any obvious reason for this choice, but it will give it a “panda” type of effect.Like past limited-edition Bremont timepieces, a part of the proceeds from sales of this Bremont 1918 will be donated to the Royal Air Forces Association. Popular with wealthy fans (and naturally boat owners) that the America’s Cup is the premiere sailing sport event in the world, and I am here in Bermuda as this recent America’s Cup series is all about to come to a close.

The most striking component, and a first for Bremont, is the AM/PM indicator at the bottom of the dial. Despite its appearance, this is not a moonphase complication, but rather is meant to be used in concert with the red-tipped “GMT” hand for tracking a second time zone. Since this GMT hand travels the dial once in 12 hours, not 24, the AM/PM indicator gives a quick clue as to whether the second time zone you’re tracking is in day or night hours. 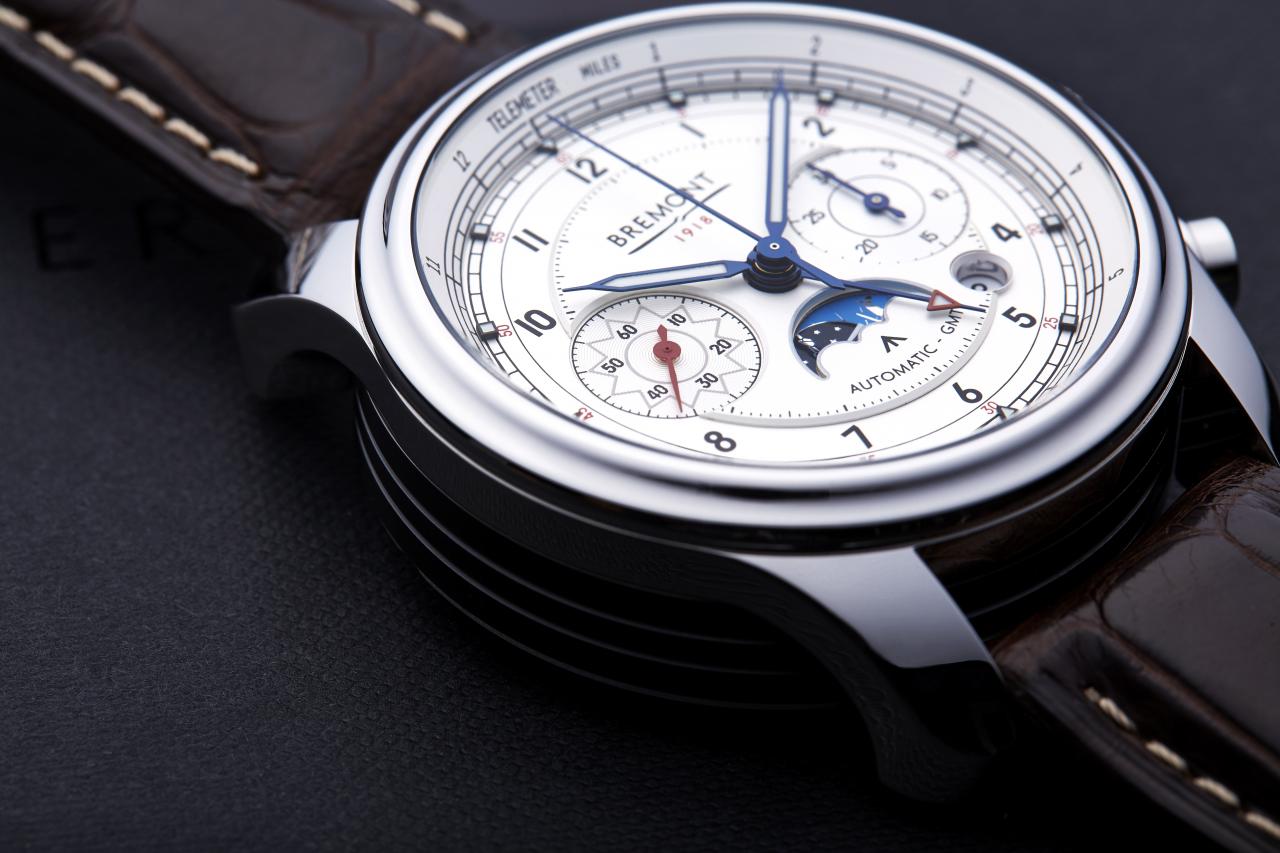 In a clever nod to the RAF theme of the watch, the AM/PM disc shows two iconic British warplanes flying during the day (a Supermarine Spitfire) and at night (an Avro Lancaster). It’s a clever, subtle incorporation of the planes that, at a glance merely looks like a standard moonphase.

Externally, the 1918 Limited Edition retains Bremont’s signature “Trip-Tick” three-part case, 43 millimeters across and 17.2 millimeters tall. The watch is rated for a healthy 100 meters of water resistance, but you might want to swap out the alligator strap if you plan to take it that deep. 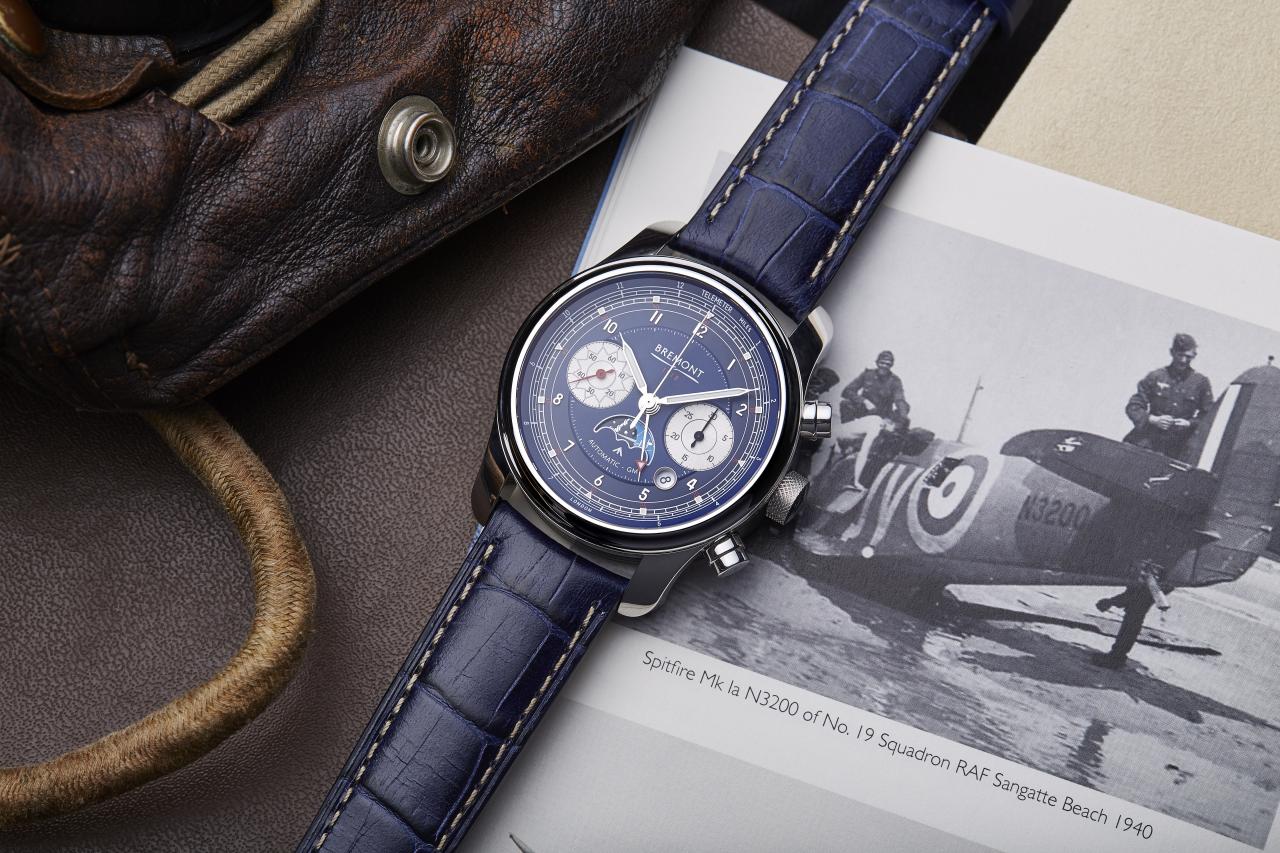 The white gold model is the most colorful of the bunch, with its two-tone blue dial.

Of course, this wouldn’t be a Bremont limited edition without some physical pieces of history and the 1918 uses recovered materials from no less than four historically important Royal Air Force planes. Flip the watch over and the sapphire caseback gives view to what Bremont calls its calibre BE-16AE, a modified and decorated take on an ETA (Valjoux) 7750 variant, that Bremont adjusts to achieve chronometer certification.

Aside from perlage on the bridges, and blued screws, the rotor is the impressive part here. Designed in the shape of an airplane propeller, the three “blades” are made with metal from a Bristol Blenheim, a Hawker Hurricane, and a Supermarine Spitfire, all of which flew during World War II. The wood inlay at the center of the rotor was derived from an RAF biplane from World War I, the S.E.5a. All of these components were salvaged during restoration of these planes and, remarkably, all four of the planes are still flying today. 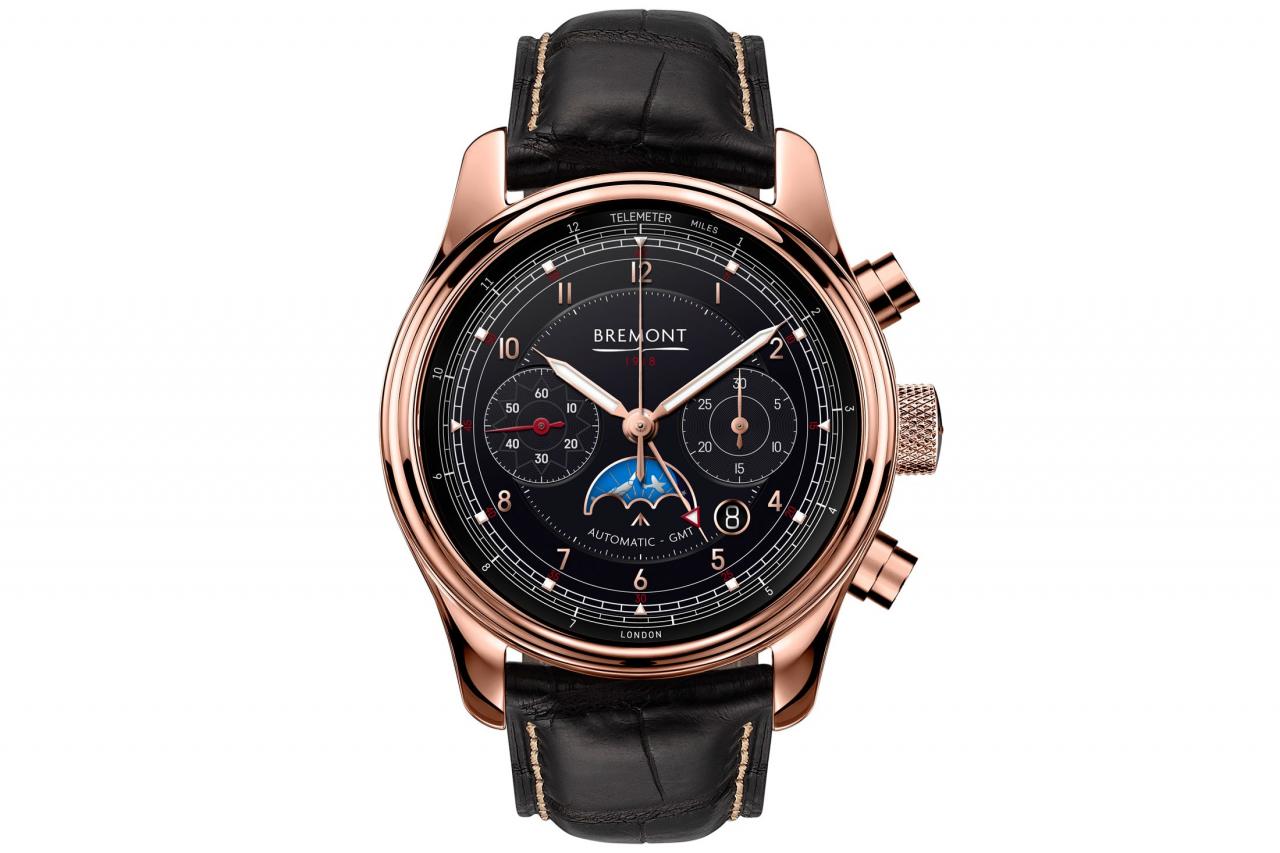 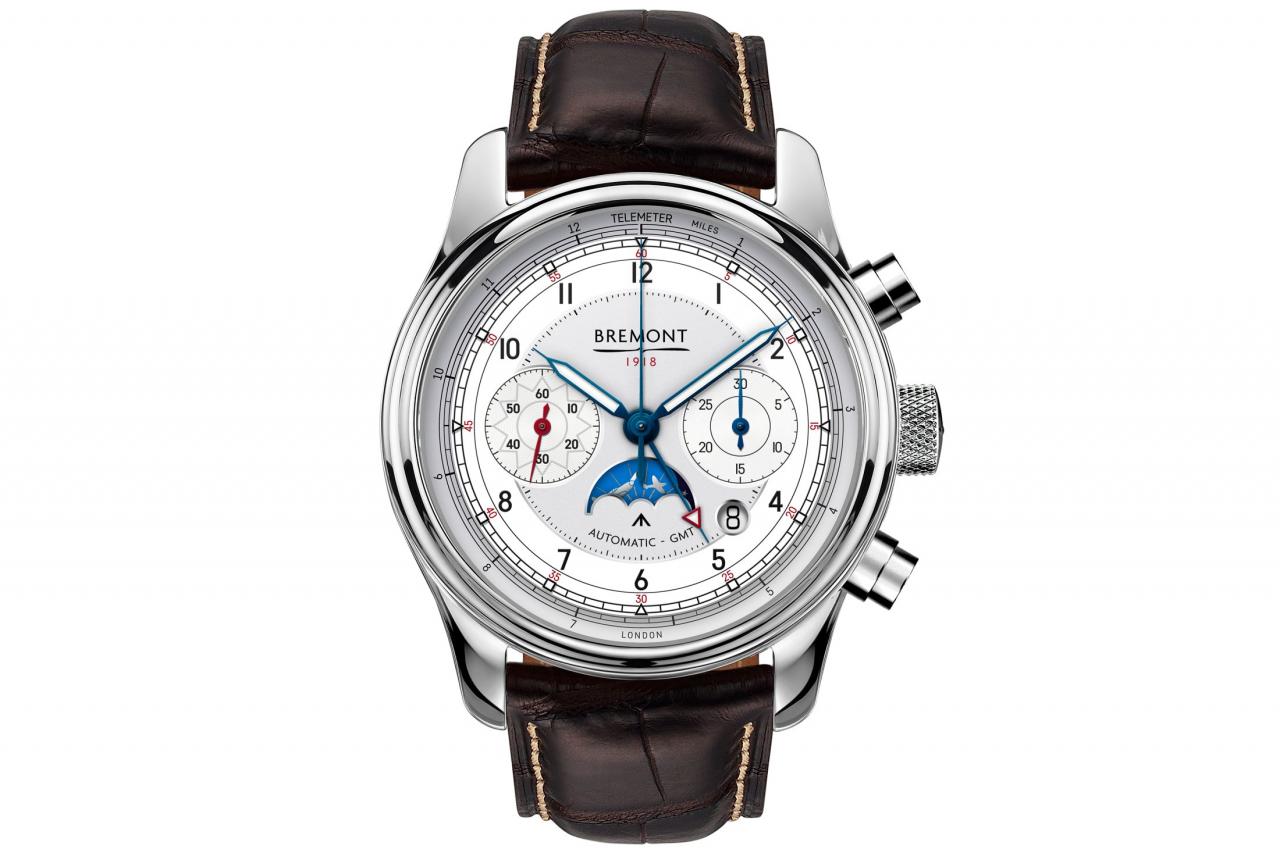 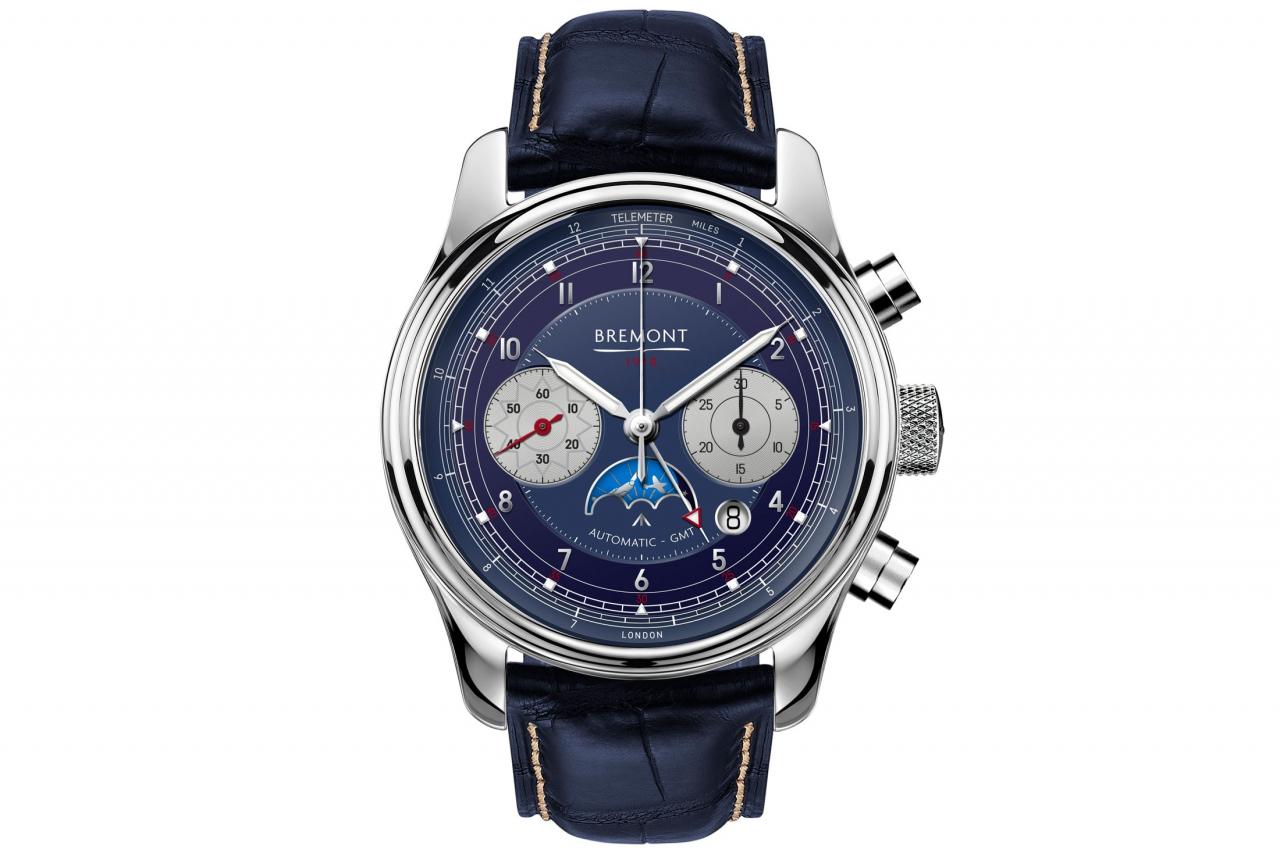 There are three versions of the Bremont 1918 Limited Edition. There will be 75 pieces made in white gold with a two-tone blue and white dial ($22,995), and another 75 in rose gold with black dial ($21,495). The stainless steel version has a white dial and blue hands, and 275 pieces will be made ($11,495). Some proceeds of these watch sales will be donated to the Royal Air Forces Association, an organization that provides support to current and past RAF members and their families.